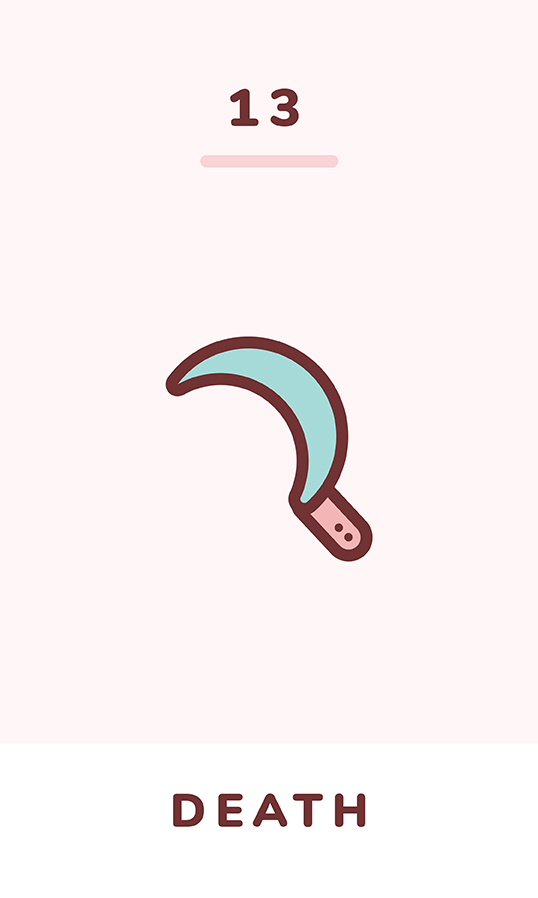 Death is one of the few cards that can terrify. Does it mean literal death? Because Death just means an ending, sometimes, it can mean human mortality. But it’s more likely to be old objects, ideas, or relationships that have gone. Death isn’t necessarily a negative card—it could represent the end of a job that isn’t right for you. But if the close is bittersweet in this situation, remember that mourning is a natural part of death. Something new is coming.

The Fool is reinvigorated and at last ready to continue her spiritual journey. That’s when she runs into Death. Death tells her not to fear. “A part of you has died, but this is natural.” Death clears the old and makes way for the new. Represented by a sickle, Death symbolizes the need for us to prune to keep growing. What is new may not replace the lost, but it will give you reason to carry on.

Death reversed indicates a resistance to change or a difficult transformation. It can also mean you are hanging onto “dead” things long after they are needed—such as someone who begins nail-biting to soothe the stress of a school semester but continues to bite her nails after the classes have ended.

If you get reversed Death in a reading, it is a sign of an imbalance. It bears repeating that this is not about this card is usually not about the final close. It’s about change followed by renewal. In career readings, give consideration to changing jobs, fields, or roles. Don’t ignore feelings of being stuck.