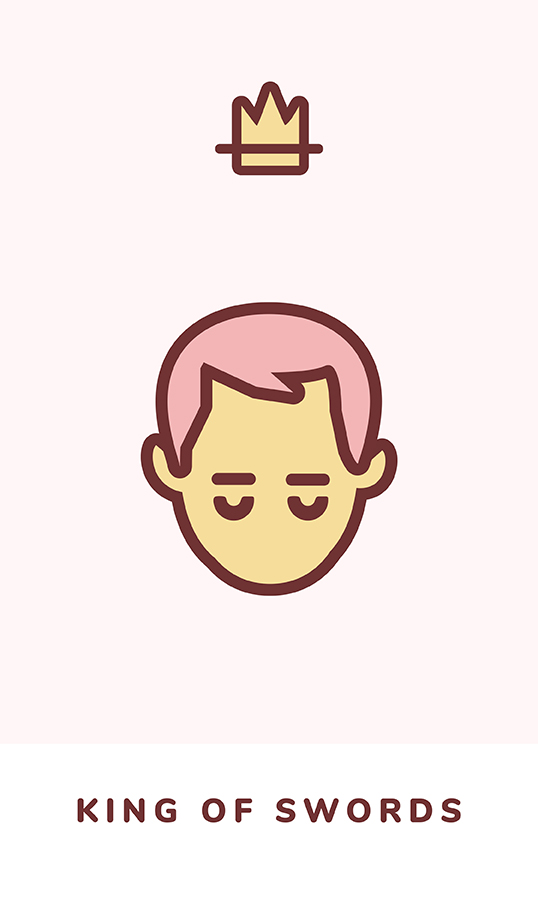 The King of Swords represents mature intellectual power and authority. They may represent a situation, energy, or actual person in your life. Though they are highly regarded, you probably wouldn’t consider the King of Swords a friend. They are the military commanders of the tarot, concerned first and foremost with strategic execution. The King of Swords uses his objective nature to seek out truth and facts.

When the King of Swords feels out of place in your spread, it suggests that you need to be more stern and clear in your goals. Be fair in your judgement of your situation, and leave behind negative emotions that are holding you back. You may be worried of looking cold and unsympathetic, but now is a time when what others think doesn’t matter as much as becoming your highest self. Use logic to navigate forward.

The King of Swords also suggests that you seek professional advice, such as legal or financial. You may need an impartial expert to provide objective and astute advice on what to do. The King of Swords has high ethical standards for himself and would never allow himself to be corrupted. Because of this, he gives sound advice that brings the best out of you.

The King of Swords reversed can be tyrannical in his approach to leadership. Prone to acts of anger and aggression, this King becomes almost abusive when you challenge his authority. He likely brings down his entire team. This card reversed can also suggest abusing one’s power, both mental and authoritative. He likes to manipulate situations so that he is never at fault and ends up making you feel crazy for speaking up. With the King of Swords reversed, there is no winning. You must break away.