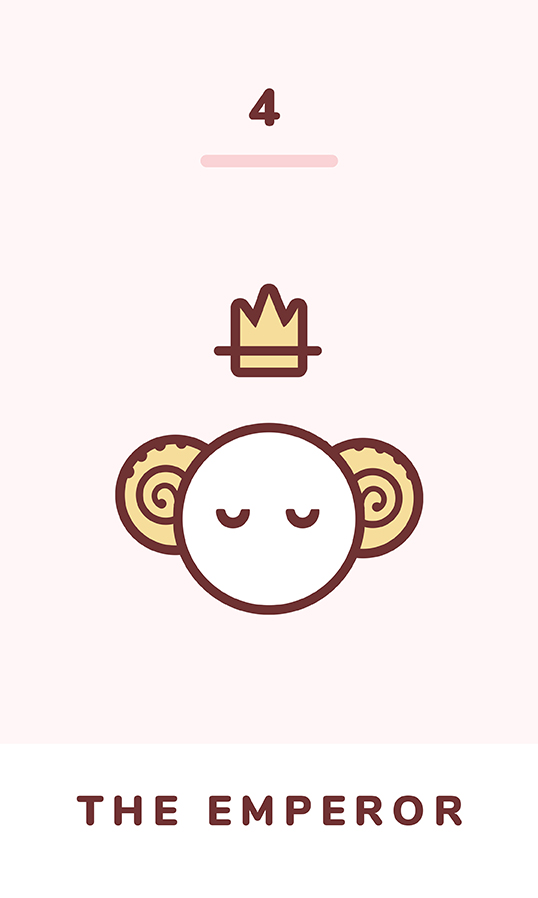 The Emperor, father figure of the tarot, brings security. As card 4, he represents the firm structure and stability that comes from personal discipline. Reflecting structure, order, and regulation, establishing law and order to provide and protect his family is the Emperor’s place in life.

The Emperor, father figure of the tarot, teaches the fool about the discipline to make the right decision. He reminds you that the lavish abundance of imagination and creativity provided by the Empress are important, but to carry them through you need discipline, strength, and bravery. Together the Empress and Emperor present the idea of balance to the Fool for the first time, something they will continue to explore throughout their journey.

Representing the Emperor is a stern, commanding ram. As the symbol of Aries, the ram stands for determination, action, initiative, and leadership.

If you get the Emperor in a reading, forge ahead. You’ll need keen concentration and focus to do what you know is best, but you have divine energy behind you. Discipline is about making the right decision, whether it’s to stay or go. If you receive this card in a career, finance, or health reading, it’s news that your logic is strong. The Emperor can also stand for a strong, usually older authority in your life.

Reversed, the Emperor can suggest that you are feeling powerless. There may be another person abusing their authoritative power, or that person could be you. If you believe you may be the one overusing their power, find the source of your insecurity and do what it takes to fix it. To regain control of the situation, avoid being too rigid in your thinking.

The Emperor reversed can also be a sign that you are having trouble with focus and personal discipline. It can be an indicator that you must try harder or perhaps that that you must avoid trying to take an authoritative role because it does sit well with you. Look to surrounding cards to find out whether routine would give you greater freedom or less. Everyone is different.

The Emperor reversed can also be a sign that a new authority is entering your life soon.

« The Empress ⭐️ The Hierophant »