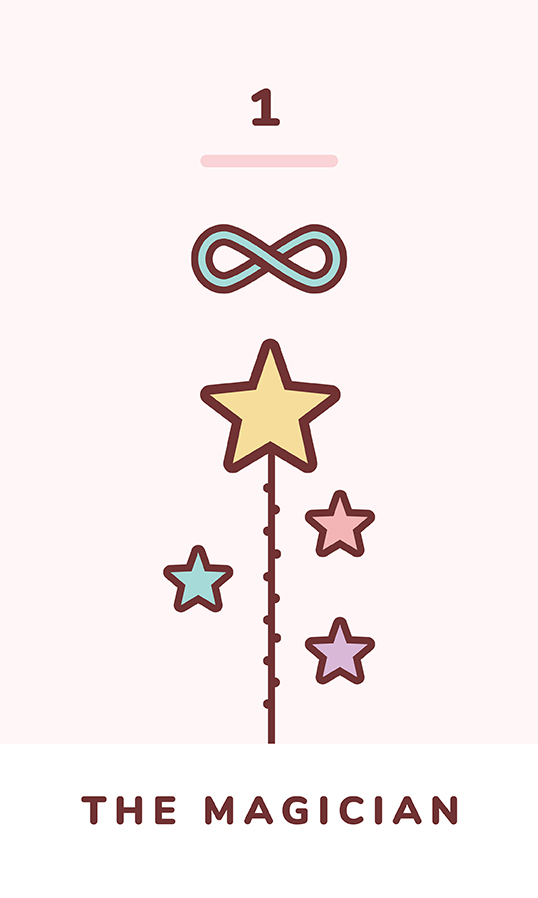 The Magician is the spark of a new idea and the power to manifest a new vision. This card is the archetype of active achievement—going after what you want with great focus. It is about making higher use of your unbounded spiritual and emotional power.

As the first teacher the Fool finds on his journey, the Magician is the one who encourages the Fool to develop their vision. The Magician, like any good teacher, is only here to show you the power and potential behind your own ideas. Armed with skill, logic, and intellect, the Magician suggests that “now is the time”—you have the creativity, tools, and resources to manifest something new to your life.

Card 1 features a wand with a star. The star symbolizes the infinite power to tap into universal energy and use it as a source of help. The wand, upright, acts as an lightning rod between the divine and the ground. Around the wand are other elements representing that the Magician carries the elements to create all the suits and thus all of life.

Getting the Magician in a reading means that there is divine energy behind your idea. You will find that no matter what you try, powerful things will happen around you. This may be a sign to buckle down and dedicate deep concentration to your tasks. Eliminate any distractions and focus on your goal. The Magician is single-minded. Commitment and focus are essential for you to achieve.

The Magician reversed symbolizes the same things as the upright position although there may be something blocking the pure energy of the card from coming through. Reversed, the Magician can be a sign of being unsure of oneself’s power or an attempt to squash down one’s own potential.

If the Magician card shows in reverse, you may be overlooking the signs that are pointing you to the direction you want to go. Pay attention to synchronicities, or coincidences that mean something to you. Self-doubt can be causing you unnecessary problems. It’s time to be brave. Even though you don’t know everything ahead of you (who does?) you need to have faith in your own abilities.

« The Fool ⭐️ The High Priestess »